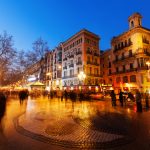 ST. PETERSBURG FL August 17, 2017 — Barcelona’s historic Las Ramblas district is the most recent popular European destination to be targeted by terrorists, after a van drove through the crowded tourist area on Thursday, August 17, 2017.

Spain is one of the most popular travel destinations for U.S. residents, according to travel insurance comparison site, Squaremouth. Travelers with trips planned to Barcelona in the next 30 days may be refunded all of their prepaid and non-refundable trip costs, as long as they bought their travel insurance policy before the attack occurred.

Interest in terrorism coverage has roughly doubled over the past year, according to Squaremouth sales data. Most travelers who are concerned about terrorism want Trip Cancellation coverage, in the event they can’t travel because an attack occurs at their destination before they leave for their trip.

Trip Interruption can refund prepaid trip costs when a trip is cut short for an unexpected reason, such as a terrorist attack, and can also cover a traveler’s additional costs to return home early.