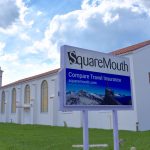 Squaremouth, a company that pioneered a comparison engine for travel insurance products, recently settled into its new home: a nearly 60-year-old, 20,000-square-foot church at 4355 Central Ave. in St. Petersburg.

Squaremouth bought the property, which covers an entire city block, for $1.4 million earlier this year after it had outgrown its downtown headquarters. The company is also amid a growth surge that saw revenues exceed $10 million in 2017, up by more than $3.4 million since 2016.

Squaremouth also announced an ambitious plan to renovate the space. Amenities in the works include tree houses, a suspension bridge, nap pods, a bar, a gym and a spa. Future plans include a public coffee shop and co-working space, according to a press release.