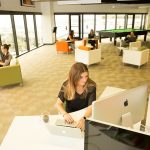 It’s nerve-wracking enough to ask your boss for a raise. But what if you had to take your request to coworkers instead?

When it comes to pay raises and new hires at travel insurance comparison website Squaremouth, the decision is done by a group vote.

The company, which has been doing peer-reviewed raises and hiring from its inception in 2003 and posts everyone’s salary internally, says it’s all about transparency.

“Everyone knows everything,” said CEO Chris Harvey. The company also posts sales and customer figures on its website for everyone to see.

When employees feel they deserve a raise, they can call a meeting with their colleagues to make their case. Employees usually have until the end of the day to make their final decision and must give an explanation of their votes, which are not anonymous. An employee needs a majority to get their raise, and all votes are equally weighted.

“There is no stopgap,” said Harvey. “We rely on everyone having enough information and being intelligent enough that they will vote for an acceptable raise.”

Along with the peer-voted raises, all employees automatically receive an annual cost of living raise every year, that varies based on inflation. In January, all employees were given a 2.1% salary raise.