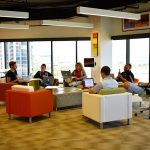 Many of these benefits have been a part of Squaremouth’s culture since the company was founded in 2003. This month, Squaremouth was named one of Inc.’s 5000 fastest-growing companies for the fifth consecutive year. The company attributes that steadfast growth to their unique culture that has been there since the start.

Only 7% of Inc. 5000 honorees make the list five times. Squaremouth is the 3,306th fastest-growing private company in the U.S. this year, up more than 500 spots from the previous year.

Squaremouth is built around transparency and communication. Every employee knows each other’s salary, and major company decisions, such as raises and new hires, come down to a group vote.

“Our culture naturally promotes equality and collaboration,” says Squaremouth Co-Founder and CEO Chris Harvey. “We make sure employees are working for the respect of all of their colleagues, not just their boss.”

Squaremouth has also been named one of the best workplaces in the country year after year, while maintaining its growth and international status as one of the best customer service teams. The company emphasizes a work-life balance, because it directly correlates happy staff with happy customers.

“A lot of companies have core values and mission statements, but at Squaremouth, we really live them out,” says Squaremouth Project Management Director Megan Moncrief. “I think when you do that, it makes the company work. We practice what we preach.”