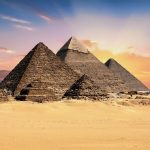 Wondering where everyone is going this year? Some of the fastest-growing destinations for American travellers are in Africa and South America.

Travel insurance comparison site Squaremouth has released its latest list of the rising destinations for those who bought travel insurance in the past year. While last year’s top spots were Israel, Iceland, Portugal and Vietnam, this year has brought an entirely new list of popular destinations. Here are the top four fastest-growing international destinations for US travellers:

There’s no doubt that travellers are heading back to Egypt in huge numbers – the UN even declared it the fastest-growing tourist destination in the world in 2018. According to Squaremouth, Egypt saw a 145.87% increase in travellers year-over-year. If you’re considering your own trip, the average cost was US$5305.95, according to Squaremouth, an increase of 7.19% from the previous year.

Morocco boasts the stunning landscapes of the Sahara and the winding medina of Marrakesh, so it’s no surprise that travellers are flocking to the country. Last year, it saw a 72.81% increase in visitors, according to Squaremouth. It’s also a bit cheaper than its fellow North African county, as the average trip for a US traveller cost $3673.32, a 6.76% increase.

Travellers who want adventure should look no further than Tanzania, which offers up incredible wildlife in the Serengeti and Ngorongoro, a chance to climb Mt Kilimanjaro, or even hit the beach in Zanzibar. The East African country saw a 61.45% increase in travellers. However, it is also the most expensive county of the four, as the average trip cost $11,216.74, a 7.81% increase.

With landscapes ranging from mountains, beaches and jungles, this South American country is enticing more visitors, with a 59.33% increase. There’s also good news for anyone who wants to explore the wealth of natural, archaeological and cultural sites throughout the country – it was the cheapest destination for a holiday at $1531.94, an increase of 8.86% from the previous year.