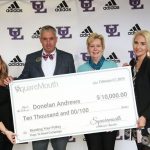 It pays to read the fine print these days.

No one knows that better than Donelan Andrews, a Georgia high school teacher who recently won a $10,000 prize just for reading an entire travel insurance contract from front to back. She took out the policy to cover a trip she’s taking with friends to London, and she read the fine print like she always does–only she had no idea that, this time, some prize money was buried inside the contract.

SquareMouth, a website that reviews and compares travel insurance policies, started the clever “Pays to Read” contest to raise awareness about “the importance of reading policy documents,” the company said in a press release, and to reward those rare travelers, like Andrews, who were diligent enough to read all of the fine print. Andrews won the grand prize within 23 hours of the contest’s launch. Sixty-five policies that included the prize information were sold before hers during that period, but none of those consumers noticed it.

For her first big trip in retirement, Andrews, 60, plans to take the bucket list trip she and her husband always wanted to take to Scotland.

Andrews’ trip to Scotland is to celebrate her and her husband’s 35th wedding anniversary in June, and it will also another mark a special occasion — her upcoming retirement. She applied for retirement just a week before winning the contest and is leaving the classroom at the end of the school year.

“It’s kind of a dual-celebration to go to Scotland,” Andrews tells MONEY.

Her husband, who is a vice president of economic development at Southern Crescent Technical College, has about eight years left on the job before retiring himself. As for Andrews, she already plans for her new-found freedom as a retiree.

“I plan to travel more and I plan to sleep past 5 a.m. everyday,” she says.

Thanks to winning the prize money, she can also afford to take another bonus trip next summer.

“Now I can just leave that money in my savings account and try to plan for next summer,” she says. “So the money’s helping me go on an additional trip.“

Andrews says discovering the contest within her travel policy was reminiscent of a test question she used to give her own students during her 25 years of teaching as a home economics and family consumer science teacher.

When she got to the last page of her contract, she came across the following statement: “If you’ve read this far, then you are one of the very few Tin Leg customers to review all of their policy documentation.”

“I used to put a question like that midway through an exam, saying ‘If you’re reading this, skip the next question.’ That caught my eye and intrigued me to keep reading,” she says.

SquareMouth also donated $5,000 each to both of the Georgia high schools Andrews teaches at, which Andrews says was especially meaningful to her, as well as $10,000 to Reading Is Fundamental, a nonprofit organization that supports children’s literacy.