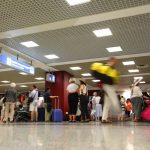 Industry experts say that consumer interest in terrorism and trip cancellation coverage has spiked after each attack.

After the attacks in Paris and Brussels, Squaremouth.com saw more travelers purchasing trip cancellation policies and searching specifically for terrorism coverage, especially for popular European destinations. The company said that the number of customers searching for terrorism coverage increased by an average of 167 percent in the month after each of the attacks. Also in the month after each attack, Squaremouth.com’s trip cancellation sales were 19 percent higher than in the same period the previous year.