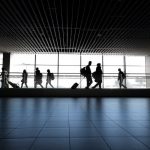 5 States Where Residents Spend the Most on Travel Insurance

Californians Spend Twice as Much as Any Other State

Residents of California spent more on travel insurance in the past year than residents of the next two top states combined.

While New Yorkers are near the top of the list in total travel insurance spending, they have the second lowest average trip cost of all U.S. states, only ahead of West Virginia.

While Floridians are spending less on trips this year, they’re also traveling more than ever.

The average trip cost of a Texas resident was the same as the previous year.

Residents of Washington spent an average of $284 on a travel insurance policy, up 3% from the previous year.