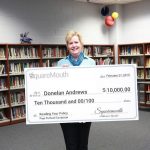 A Georgia woman proved the importance of reading the fine print when she studied her new insurance policy thoroughly and won $10,000 after finding a secret contest buried within.

Donelan Andrews had just bought travel insurance from Florida-based company Squaremouth for a trip to London — where she’ll be traveling in September with six of her closest friends — when she sat down to read the entire policy, according to CBS News. As a self-proclaimed nerd, Andrews gives every policy, contract and agreement she receives an exhaustive once-over.

“The main reason I always do it is that I went to the University of Georgia and I majored in consumer economics,” Andrews said. “So it’s always been a passion of mine to be consumer-aware, and particularly, not to be taken advantage of. I even read that HIPAA document they give you at the doctor’s office.”

This time, though, she found more than she had bargained for. Deep within the fine print of her Tin Leg Travel Insurance terms was a contest called Pays to Read, which opened with this note: “If you’ve read this far, then you are one of the very few Tin Leg customers to review all of their policy documentation.”

“That caught my eye and intrigued me to keep reading,” Andrews said.

The company then included instructions for sending a message to a provided email address; the person who emailed a note first would redeem a prize. Andrews was astounded to discover that the prize was such a substantial amount of money. And Squaremouth executives were shocked that they’d found a winner so quickly.

The contest, brainstormed by the company’s CEO Chris Harvey, quietly launched a month ago, and the Squaremouth team expected it to run for the entire year, according to the Tampa Bay Times. If no one claimed the prize by the contest deadline, they would donate the jackpot to charity instead. Only six employees knew about the plan and were sworn to secrecy. But none of them were anticipating a meticulous high school teacher like Andrews to come along.

“I used to put a question like that midway through an exam, saying, ‘If you’re reading this, skip the next question,’” Andrews told CBS News. She’d also plant “Easter eggs” for her students like “circle question number five three times and get 10 extra points.”

After Andrews claimed her prize, Squaremouth shared on its company website the reason they held the secret contest.