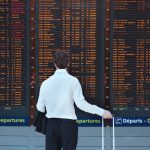 It turns out that California, New York, Florida, Texas and Washington are responsible for almost 50 per cent of all travel insurance purchases in the US. And more striking still, the figures show that Californians spend twice as much as any other state, expending more on travel insurance in the past year than residents of the next two top states combined. And what are they purchasing this travel insurance for? According to the study, the top international destination for Californians was Mexico, and the average trip cost for a Californian resident fell at around $3,548.

Elsewhere, while New Yorkers hover around the top of the list in terms of total travel insurance spending, they have the second lowest average trip cost of all US states at $2,909 (West Virginia takes the crown at number one). This might have something to do with the fact that the average traveller age of New York residents lies in the 25-40 realm.

Though residents of Florida are spending less on trips this year (averaging at $3,965), they’re also travelling more than ever. With an average age range of 50-69 (the highest of the five states), it seems that Floridians enjoy a holiday steeped in history and culture, Italy being their top international destination for this year. And what’s more, the state has a 27-per-cent year-over-year increase in money spent on travel insurance.

Mexico also marks the top international travel destination for the second largest US state, Texas. Although the average trip cost of a Texas resident remained the same as the previous year ($3,475), Texas came top out of the five in terms of lavish spending; the most expensive trip for Texas residents was $175,000, surpassing that of Californians by $3,000.

Lastly, Squaremouth reveals that Washington, the fifth state in the list, has witnessed a 17-per-cent year-over-year increase in money spent on travel insurance, up three per cent from the previous year, with residents spending an average of $284 on a travel insurance policy. And favoring a quick hop over the fence, the top international destination of Washington residents is Canada.

It’s great to see Squaremouth reporting that residents from all 50 states are spending more to protect their trips this year, but the large geographical imbalance in spending may well also highlight a lack of consumer direction and incentive when it comes to purchasing travel insurance. With such a wide array of age ranges, destinations and expenses, it’s important that customers are encouraged to take out the right cover for their trip.