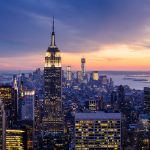 ST PETERSBURG FL November 1, 2017 –– New York City is the most recent tourist destination targeted by a terrorist attack, after a man drove a truck down a crowded bicycle path, killing 8 people and injuring many others.

Travel insurance comparison site, Squaremouth says once the U.S. Department of State declared the attack an “act of terror”, it became an event that may be covered under travel insurance.

With New York City being one of the most popular tourist destinations in the world, Squaremouth explains when concerned travelers can be covered to cancel their upcoming trips to New York City.

Canceling Your New York Trip Because of the Terrorist Attack

Trip Cancellation allows travelers to be refunded money they spent on their airline tickets and hotel rooms in New York if they have to stay home due to the terrorist attack.

In order to be covered to cancel, the attack must have occurred within 7 to 30 days of a traveler’s arrival in New York, depending on the policy.

Leaving New York Early Because of the Terrorist Attack

Policies with Trip Cancellation coverage typically include interruption coverage, a benefit which covers travelers to return home early if they purchased a travel insurance policy before the attack occurred.

This coverage can reimburse travelers for the nights they didn’t spend in their hotel rooms, excursions they didn’t take, and money they spent on transportation getting home.