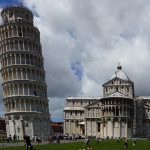 ST. PETERSBURG Fla. July 31, 2019 — More Americans are choosing to spend their vacation days across the pond this year, with interest in European destinations spiking 29% over last year, according to Squaremouth data. As we near the height of travel season, Squaremouth reveals the biggest European travel trends, including where travelers are headed, their travel concerns, and how much they’re spending.

Coverage for Terrorism is Top Concern for Some Destinations