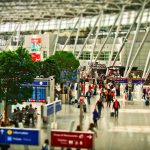 The five most popular European destinations — Italy, France, UK, Germany and Spain — account for nearly a quarter of Squaremouth customers traveling this summer, consistent with last year. Additional European destinations are gaining popularity among the website’s customers, including Norway and Denmark, compared to last summer.

Squaremouth has also seen more Americans choosing to travel closer to home this summer, with Canada rising to the second most popular international destination overall, a significant increase compared to last summer.

The current travel alert follows a previous Europe Travel Alert issued by the State Department on March 22, following the Brussels terrorist attacks. In the months since the initial advisory, Squaremouth has not seen a decrease in the number of travelers insuring trips to popular European destinations. The only exception is France, which has dropped slightly compared to Squaremouth sales for the same time period last year.

You cannot cancel your trip because of the Europe Travel Alert

The Europe Travel Alert does not affect travel insurance coverage