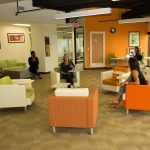 ST. PETERSBURG FL June 1, 2017 — Being strange isn’t just encouraged at Squaremouth, it’s a core value at the small but quickly-growing insurance software company. In June 2017, the St. Petersburg, Florida-based company was named one of Inc. Magazine’s Best Workplaces in America for its distinctive culture and benefits.

Squaremouth’s penthouse office, with glass walls and sweeping views of Tampa Bay, is stocked with arcade games, a beer fridge, and napping couches. But employees say the company’s perks, like unlimited paid vacation with a 10-day minimum, and a birthday beer bonus, are the key to the award-winning culture.

“Visually, we’re very open because there are no cubicles or divides between people,” says Squaremouth Claims Director, Brandi Morse. “But it’s deeper than that. Transparency extends throughout everything we do.”

Squaremouth believes in complete company-wide transparency, from floor plans to financials. There are no assigned desks in the offices, and employees cannot sit in the same seat twice in a row.

Perhaps the “strangest” feature: employees know each other’s salary, and major company decisions, including new hires and employee raises, come down to a majority vote.

“We built our culture to naturally promote equality and collaboration,” says Squaremouth Co-Founder and CEO, Chris Harvey. “We make sure our employees are really happy, which transfers directly to our customers.”

The approach has paid off. Squaremouth has surpassed $18 million in annual sales, earning national and international recognition for growth, culture, and customer service. The company has been named an Inc. 5000 fastest-growing company each year since 2013, and has won several customer service awards, including a Gold Stevie Award for International Customer Service Department of the Year in 2017.

“Everything you’re looking at may be something a Silicon Valley company or a new tech startup would consider,” says Squaremouth Design Team Manager, Anna Gernandt. “We’re doing all of those things already. We’ve done them from the start.”

About Squaremouth: Squaremouth.com has insured over 2 million travelers. Using Squaremouth’s intuitive quoting and comparison engine, award-winning support team, and verified customer reviews, travelers can save time and money to find the best travel insurance policy for their trip.