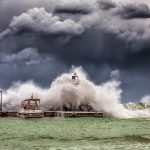 Meteorologist Dan Kottlowski recalls a conversation when someone mentioned a great deal for getaways to the Bahamas and Florida in August and September.

While it is a slower time for travel, plenty of tourists still flock to the Caribbean, Bahamas, U.S. East Coast and Gulf of Mexico during the most active parts of the season between mid-August and mid-October. Earlier this month, the National Oceanic and Atmospheric Administration released an updated outlook for the full hurricane season, which stretches from June 1 through Nov. 30. It expects 10 to 17 named storms, of which five to nine will become hurricanes. Of those, two to four are expected to be “major” hurricanes with winds of 111 miles per hour or more.

Timing matters. While hurricane season lasts from June 1 to Nov. 30, the peak of that season runs from mid-August through mid-October, according to NOAA. So travelers can hedge their bets and plan around the busiest time for storms. If they’re considering the Caribbean, they can also choose islands outside the hurricane belt that are less frequently struck.

This is the time to buy travel insurance because travelers can get coverage for a trip only if they have insurance in place before a storm is named, said Jenna Hummer, spokeswoman for travel insurance comparison site Squaremouth.